Our thoughts and prayers go out to the Marcheta E. Chiles family at this time. We thank them for thinking of our children and supporting our mission during their time of loss by suggesting donations to the Noyes Home for Children.
If you would like to send donations in memory of Marcheta E. Chiles they can be mail to:

Or made online In Memory of Marcheta E. Chiles 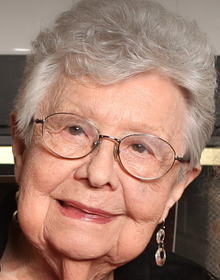 Marcheta Erwin Chiles of Lee’s Summit, MO went to be with the Lord on July 19, 2018, at the age of 94. She was born Georgia Marcheta Erwin in Bolivar, MO on January 24, 1924 to Will and Georgia Belle Graham Erwin. Marcheta, the youngest in the family, was the quiet, shy and fun-loving sister of William Edwin Erwin (Mary, children – Gary Erwin and Judy Erwin Wilkerson), Marjorie Louis Erwin (Les White, daughter Janice White Pegler), and Mary Jane Erwin (Spahr).

At the age of 6 weeks, Marcheta’s family moved to Mount Washington, MO where they lived for three years. In 1927 the family moved to Independence, MO where Marcheta grew up. In third grade, Marcheta was struck with Diphtheria that nearly took her life, but survived through God’s grace and the efforts of a specialist named Dr. Green. In sixth grade, Marcheta survived Scarlet Fever. During the Depression, the Erwin family did what they could to help others despite being stretched themselves. Marcheta’s dad would let relatives live with them until they could get back on their feet again. She remembered, in particular, Uncle Howard living with them and warming bricks to keep the kids’ feet warm at night, and awaking to polished shoes kept warm around the pot-bellied stove. In 1939, William (Bill) H. Chiles, a fellow student at William Chrisman High School, first saw Marcheta during a study hall. He said studying then became more appealing, as he was captivated by a beautiful girl with big brown eyes that sparkled when she laughed. “I would look at the clock on the wall so I could stare at her sitting right under it”, he reflected one day. Two weeks later he introduced himself as if it were part of his job as the Student Body President. From that introduction on, Bill and Marcheta were sweethearts. When World War II came upon the United States, Bill served overseas in the Army. During that time, Marcheta and Marjorie took care of their sister, Mary Jane who had become ill. They moved to Colorado for a while in an effort to help Mary Jane’s respiratory problems. Marcheta worked at the Ordinance Plant to support the three of them.

After the war, Marcheta and Bill were married on January 17, 1946 at the First Christian Church in Independence, MO. They were married just 46 days short of 50 years with Bill’s passing. In their early marriage, Bill went to Central Methodist College where Marcheta worked in the office of the college to support them. Later Bill went to the University of Tennessee for his Master’s degree, and Marcheta worked at Sears in customer service. Marcheta excelled in secretarial skills, Gregg Shorthand, and speed typing. Truth be told, she earned part of Bill’s graduate degree with her exceptional proofreading and editing skills. In the 1950’s, they had two children, William Erwin Chiles and Marcia Jane Chiles. They also survived the 1957 Ruskin Heights tornado. Marcheta was known for her wit, ornery humor, strength, life logic and her wonderful ability to bring joy to anyone who was blessed to share time with her. Marcheta and Bill (Executive Director of The Noyes Home for Children 1970-1992) were dedicated to supporting the services of Noyes Home during their residency in St. Joseph, MO. Marcheta was a very caring and kind-hearted person. She loved to make sure children were cared for and given opportunities for success.

Known as “Granny” to the grandchildren and great-grandchildren, she greatly enjoyed time with family and particularly lit up over the last decade when she was able to spend time with her greatgrandchildren. Marcheta believed God is in charge, and what He purposed us to do is to leave a place better than we found it, care for others, and keep going through life’s challenges, even when we are unsure of the “why”. Her favorite Bible verse was John 3:16. She was preceded in passing by her parents, her siblings and their spouses, her husband, her son, and her daughter-in-law, Linda.

Marcheta will be greatly missed, but her appreciation of people and love of family togetherness will live on amongst the Chiles family. In order to allow an opportunity for us to share memories and celebrate the many ways Marcheta blessed us during her time with us, a Celebration Reception will be held at the Gamber Community Center, 4 SE Independence Ave, Lee’s Summit, MO 64063, on Sunday, August 5, 2018, from 3:30pm to 5:30pm. In lieu of flowers, the family requests memorial contributions to help care for the beautiful children at The Noyes Home for Children in St. Joseph, MO. https://noyeshome.org/donate. Arrangements will be managed by the Langsford Funeral Home in Lee’s Summit.