In Memory of Virginia C. Wissehr, 1920-2017 | Obituary | St. Joseph Mo
Our thoughts and prayers go out to the Wissehr family at this time. We thank them for thinking of our children and supporting our mission during their time of loss by suggesting donations to the Noyes Home for Children.

If you would like to send donations in memory of Virginia C. Wissehr they can be mail to:

Or made online In Memory of Virginia C. Wissehr 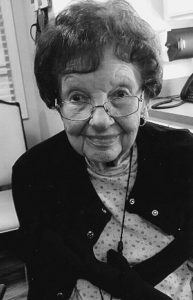 She played an active role in her husbands studies at Eden Theological Seminary in Webster Groves, and in the two churches he served for 20 years, Faith United Church of Christ, Webster Groves, and Immanuel Congregational Church, St. Louis. They had a joint ministry.

Virginia was an active participant in The Camps Farthest Out for over 30 years as a song leader and speaker. She was active in Church Women United as a member and in leadership positions for over 30 years. For many years, she was a youth group leader and an active member of many church circles. She was always visiting church members who were shut-ins or in the hospital.

She was preceded in death by: her husband, Rev. Norman R. Wissehr; her parents, Theodore and Emma Goeddel; her brother, Harold Goeddel; and her grandson, John Wissehr.

The family will receive friends following the service, at the church.

Virginia will be cremated under the direction of Meierhoffer Funeral Home & Crematory.

The family suggests memorial gifts to The Noyes Home for Children, in St. Joseph.